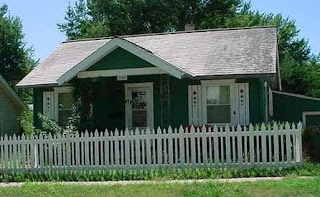 Omaha.com reports
on what happened in this little house on the prairie.


Lorenzo Bush, 26, died of his gunshot wounds about 11:40 p.m. Sunday, shortly after he ran out of the home at 3508 N. 55th St.
His wife, Regina Bush, was questioned by police and released Monday morning.
According to 911 and investigators' reports, Lorenzo Bush attacked his wife and choked her, ripping her shirt and pulling out clumps of her hair. She managed to get a gun that he had and shot him, according to the reports.
Two children, ages 3 and 2, were at the home, according to the 911 dispatches. Christine Coker, mother of Regina Bush, confirmed Monday morning that her daughter had been questioned by police and released.

If half of what they say about Lorenzo it true, then it must have been a justified shooting.

What do you think? Please leave a comment.
Posted by Unknown at 7:23 AM