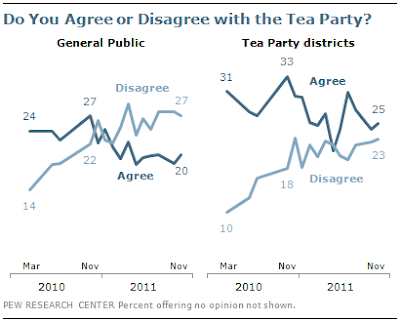 OK, all you fans of the ironically named "Road to Serfdom" which really advocates the policies that led to the rise of dictatorships (ever notice all those Scandanavian Social Democratic Countries have the happiest citizens?): it has come out in a recent survey by the Pew Charitable Trust that the Tea Party has not only lost support nationwide, but also in the congressional districts represented by members of the House Tea Party Caucus. Not to mention, the image of the Republican Party has declined even more sharply in these GOP-controlled districts than across the country at large.

Hey, but what do you expect when they advocate policies that make no sense whatsoever?
Posted by Laci The Dog at 9:53 PM