ABC reports
Already deemed not guilty of criminal offenses in a non-jury (cover-up) trial, Officer Gescard Isnora has been "deemed reckless" by a police commission  which has recommended his dismissal. Of course that doesn't mean it will happen.  It's only a recommendation, after all. 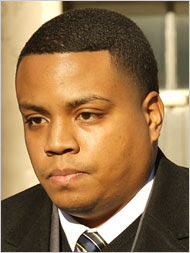 Isnora had been assigned to the Queens strip club where the three friends were partying before Bell's wedding. Isnora said he believed Guzman had a gun because he heard him say "Get my gun" outside the club. He said he thought the men were going to their car to get a weapon and commit a drive-by shooting to get even with another group of men with whom they had been arguing moments earlier outside.
No weapon was found in Bell's car.

How could he not be in jail? That's more than a mistake.

I'm sometimes accused of wanting to ban civilian ownership of guns and allowing only cops to have them. Nothing could be further from the truth. First of all I don't want to ban guns. Secondly, not only don't I favor the police in these matters, I would hold them to an even higher standard. Sadly, they don't even come close to that standard now. Example, Gescard Isnora, a dangerous criminal and unfit gun owner who happens to have a badge.

What's your opinion? Please leave a comment.
Posted by Unknown at 7:17 AM