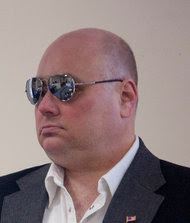 The New York Times reports on the latest kerfuffle concerning Steven Hopler, the blind New Jersey gun owner. Of course he's not the only blind gun owner who's made the news.

When Hopler shot himself in the leg last year, I declared that I'm opposed to blind folks owning guns. That was met with the usual blowback from the gun crowd. But, I remain unconvinced.

Mr. Hopler, 49, who lives on a winding road here, is once again fighting for his right to keep and bear arms despite having been totally blind for most of his adult life. He has repeatedly persuaded judges to let him keep his collection of more than a dozen handguns, but doing so has been more complicated since 2008, when he was handling a .357 Magnum he owned and shot himself in the shin.

Not only did he shoot himself, which for me is an automatic disqualifier, but while he was in the hospital from that stupidity, burglars entered his house and took some guns, one of which was used in a suicide. You see, having the right to own guns for Hopler and many like him, means leaving them lying around the house is perfectly acceptable. "they [the police] found one loaded pistol in an oven mitt and another gun tucked under a sofa cushion."

Then, there's the question of his drinking. Once, he was even arrested for being disorderly in a bar, another disqualifier for me.

The reason he's in the news again is that the Morris County prosecutor’s office is trying to have Mr. Hopler’s gun permits revoked.

What's your opinion?  Isn't it odd that in New Jersey where gun control is strong there's no provision for an eye examination prior to issuing a gun permit?  Shouldn't that be one of the main qualifiers?

If I understood correctly, in Hopler's case we're talking about gun permits to own guns in the home, not concealed carry. That means in other states more lenient than New Jersey, blind folks or people otherwise handicapped in such a way as to make safe gun handling impossible can own guns all they want.

That's wrong and something should be done about it.  Kudos to the Morris County Porsecutor who decided to pursue this case.  Good luck.