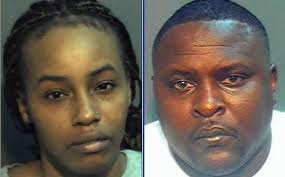 
The parents of a 4-year-old girl are in the Orange County Jail and facing charges of child neglect in the accidental shooting of their daughter.

Leshumbia Stokes and Marie Buskey were in handcuffs and charged with child neglect just hours after their 4-year-old awoke from a coma in at Orlando's Arnold Palmer Hospital for Children.

The girl had been in a medically induced coma since she accidentally shot herself nearly a month ago in their Titusville home. She woke up on Wednesday.

Titusville police believe the girl's father, Stokes, left a loaded gun on the couch of his Craig Avenue home. They think the girl found the gun and shot herself.

It seems pretty clear that the dad is a gangster, bullet holes in the car and all that, but I'm sure he told his little girl to never touch daddy's gun. Criminals love their kids too.

The problem is guns and kids don't mix.
Posted by Unknown at 8:45 AM