Broken Etch-a-sketch?
Could R-money be out as a candidate if this gets bigger (and it will)? Who would run instead? 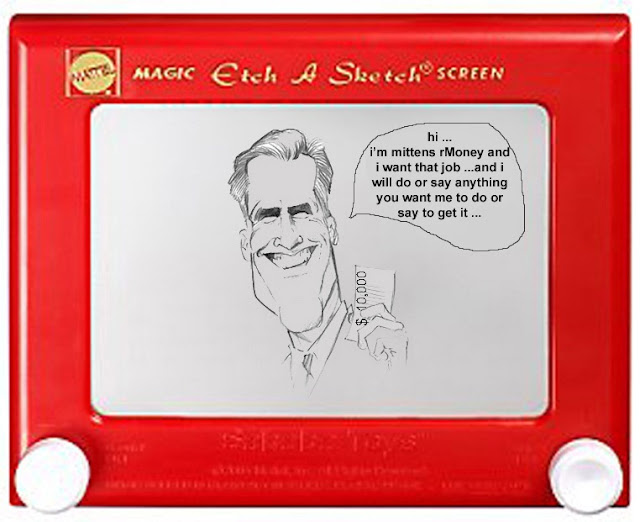 Mitts on R-money has changed his positions, and he has apparently LIED, often.

In this particular instance, he appears to have lied about his relationship to Bain Capital. He has variously HIMSELF, characterized it as a full-time leave of absence, and a part time leave of absence, or retirement; the story changed over time. He continued to attend, and apparently preside, over board meetings, and he continued to be compensated for those duties, SEPARATELY - above and beyond his investment earnings, to the tune of $100,000. He didn't get that for being decorative.
While he was 'running' the Olympics, he was making trips back to MA for those meetings on an apparently regular basis, not a one-off visit back home were he just 'dropped by', or had to answer a transition question. Certainly this will raise new and significant questions about the R-money tax returns from those years as well, above and beyond the pressure on R-money to live up to his father's example.
And now, he's gotten caught, repeatedly, by different news organizations for those lies. Real news organizations that do honest actual research, unlike Faux News / Fox News. Some of the news investigation is duplicated, but other parts of the documentation are unique to each news organization.
His campaign claimed that R-money was like an Etch-a-sketch; that he could recreate himself without, effectively, any regard or responsibility for what he previously said, and without regard to any contradictory prior position.
It seems the Etch a Sketch is broken, or at least starting to seriously break down.

From the Boston Globe, who declines to print a retraction, because their reporting is accurate:
Romney stayed longer at Bain

By Callum Borchers and Christopher Rowland
Globe Correspondent Globe Staff / July 12, 2012
Government documents filed by Mitt Romney and Bain Capital say Romney remained chief executive and chairman of the firm three years beyond the date he said he ceded control, even creating five new investment partnerships during that time.
Romney has said he left Bain in 1999 to lead the winter Olympics in Salt Lake City, ending his role in the company. But public Securities and Exchange Commission documents filed later by Bain Capital state he remained the firm’s “sole stockholder, chairman of the board, chief executive officer, and president.”
Also, a Massachusetts financial disclosure form Romney filed in 2003 states that he still owned 100 percent of Bain Capital in 2002. And Romney’s state financial disclosure forms indicate he earned at least $100,000 as a Bain “executive” in 2001 and 2002, separate from investment earnings.
Read the rest of the Globe coverage here. 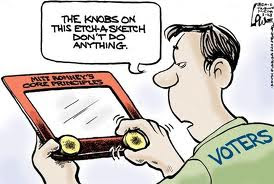 Sorry Mitts on R-money; you can shake your Etch-a-sketch all you want; this isn't going away. I expect it is going to get a lot worse, not better. Which raises an interesting hypothetical question:
if this ongoing news investigation by multiple reporters wrecks the candidacy of Mitt R-money, if this rises to the level of an actual felony prosecution for example --- WHO WOULD BE THE REPLACEMENT CANDIDATE instead of Mitts on R-money?

Nut Gingrich was a disaster, and no one in their right-wing mind could believe he would have a serious chance against Obama. Rick Saint-or-bum, would be even less viable; he dropped out when it became likely he couldn't win his home state. Likewise it is unlikely that Michele Bachmann could win any state, including Minnesota, much less prevail nationally; she's a huge question mark to even get re-elected to Congress, especially living outside CD6.

Given the odd success by the incipient campaign of Ron Paul, could he be the alternate choice? Not that he could win either, but he might actually be the least embarrassing candidate the right could run.

But would the big money that has been behind Mitts on R-money support him? I don't think so, certainly not on the scale they are willing to spend the big bucks on Mittens. What a shame the right can't field good candidates, or come up with any new ideas. All those Bush era retreads would have to go back into whatever closet where they have been hiding from the total embarrassment for the disaster that is the legacy of Dubya and Darth Cheney.
I liked George Romney; he was an impressive man. The son apple didn't so much just fall farther from the tree than is good, it appears to be rotting.
Posted by dog gone at 1:18 PM