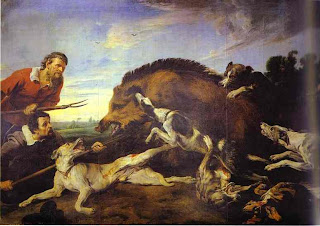 I did some posts a while back about hunting where I mentioned hunting boar with hounds and a boar spear. Someone made a comment about wanting to see me do this believing that I wouldn't be willing to give it a go.

Far from it, I would love to try it, but the problem is that the hunter isn't the first to encounter game when one hunts with dogs--it's usually the dogs who will encounter the prey first.

Upon finding a pig, a dog pack will chase the animal until he or she is exhausted. Hunters follow on foot, horseback, or in swamp buggies (that's usually in the USA). 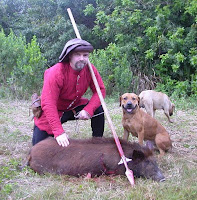 " . . . a wild scene. Leif and Tucker [dogs], who have raced past Cock [hunter] just before he reached the bay, are latched onto the pig’s ears. The other dogs bard and dart in to bite the pig’s flank. The pig squeals with a pitch and volume that would make the whine of a table saw seem like a low hum. Cock grabs its back legs, throws it down, puts a knee on its shoulder and begins stabbing. After four or five tries, he pierces the heart. The blood flows, the squealing stops and the admiration of the carcass begins.”
– description of a hunt, St. Petersburg Times, June 4, 1999

Before the dogs are restrained, the pig can suffer horrible injuries. Occasionally, a wounded pig will escape, only to later die a lingering death.

Of course, dogs enjoy the hell out of this, especially if they are hunting breeds as the picture of the dogs with historic hunting reenactor Richard Swinney show. Anyone who knows dog expressions can tell the dog with Swinney is pleased as hell, and the dog in the background wants another boar! Hunting is a natural activity for dogs and hunting with them bonds one to the pack.

Naturally, the animal rights crowd find this to be repugnant and hunting boar with dogs is illegal in some jurisdictions: this includes where I live. I believe that the nearest place for me to do this is in Germany and I would have to join a club.

And yes, I do go hunting with dogs and have experience in these matters.
Posted by Laci The Dog at 12:59 PM