I love a parade, especially this one.

"It's not about saving money. It's about imposing ideology."
The political right is afraid of a free exchange of information; objective reality, fact based discussion rather than ideology, and a free exchange of ideas are all threatening to them.  As extremists, as fascists, they use the word freedom a lot, but they routinely trample the freedom of others, only lockstep conformity is allowed.
Conservatives are anti-science.  That's true here, and it's true across our northern border.

As background to the protest parade of scientists on the national parliament building in Canada, the CBC, which unlike our national broadcasting network, still has funding, had this coverage earlier this year, published this earlier this year:

Are Canada's federal scientists being 'muzzled'?

Kristi Miller would likely be able to help Canadians who don't have degrees in biology understand her groundbreaking — and complex — research into the Pacific salmon stock, which was published more than a year ago.

But so far, the federal Department of Fisheries and Oceans scientist, who toils in a lab on Vancouver Island, has only spoken publicly at a formal inquiry into the decline of sockeye salmon in the Fraser River.

Media requests to speak to her have not resulted in interviews — and the decision to keep her off-limits to reporters has reached as high as officials in the Privy Council Office in Ottawa.The federal government says it is not muzzling its scientists, but Miller's name often emerges when the issue arises, as it has more frequently of late both inside and outside Canada's scientific community.

For some, there's far more at stake here than a simple opportunity for a biologist or a climatologist to talk about viruses or the ozone layer.

"If scientists working within government are not free to discuss their science and the potential implications of it, then what does that say about us as a society?" asks Jeffrey Hutchings, a professor and Canada Research Chair in Marine Conservation and Biodiversity at Dalhousie University in Halifax.

For Hutchings, who had his own fight with federal government secrecy over the closure of the Atlantic cod fishery in the 1990s, there's a rather grim answer to his question.

It is, as he puts it, that "we have somehow deemed it OK or permissible for an Iron Curtain to be drawn across the communication of science in this country." 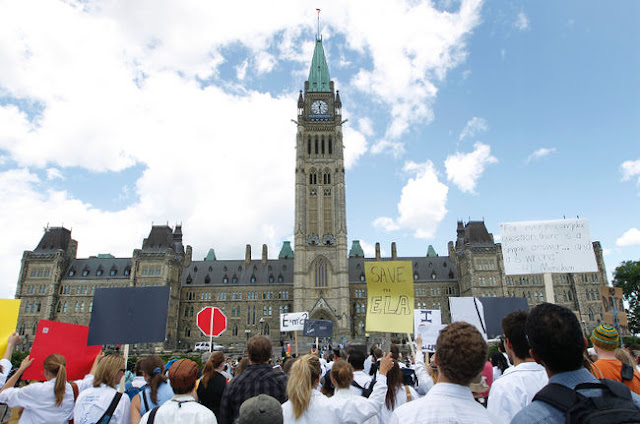 OTTAWA - Hundreds of scientists left their beakers and test tubes in the lab Tuesday to protest cuts to research programs.

"We are here today to commemorate the untimely death of evidence in Canada," said Katie Gibbs, a PhD student at the University of Ottawa who organized the rally. "After a long battle with the current federal government, evidence has suffered its final blow. Between sweeping cuts to federal science programs, legislative changes in Bill C-38 and the muzzling of scientists, the injuries to evidence have been overwhelming."

Scientists - many of whom were already in Ottawa for the International Congress on Evolutionary Biology conference - were joined by public sector unions, NGOs and opposition MPs as they marched from Ottawa's Convention Centre to Parliament Hill wearing lab coats and carrying protest signs.

The CBC covered today's protest by scientists here.   I couldn't get the video to embed properly, but here are some photos of the event. 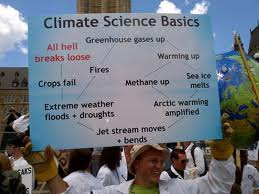 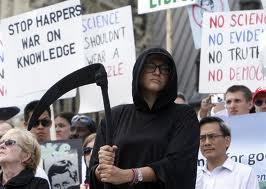 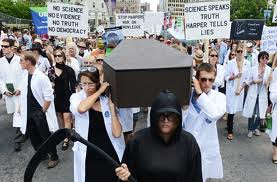 A funeral procession of scientists wearing white lab coats and mourners dressed in black will take to the streets of Ottawa today to "mourn the death of Evidence" and protest what they see as an attack on environmental science by the Harper government.

Canada's prime minister Stephen Harper: his government is accused of jeopardizing Canada’s scientific reputation. (Photograph: Todd Korol/Reuters) The scientists say a rash of recent cuts exposes the government's hostility to evidence-based research and is putting the public at risk. Despite claims by government officials that the cuts are a necessary part of a cost-cutting and efficiency plan, the scientists claim they are directed at research programs critical of the government's energy development plans, specifically the tar sands mining taking place in Alberta.
“There is a systematic campaign to reduce the flow of scientific evidence to Canadians,” said Dr. Scott Findlay, Associate Professor and former Director the University of Ottawa’s Institute of Environment. “As a result, the public hears and sees only information that supports federal government policy or ideology. That’s not evidence, that’s propaganda.”
Scientists and organizers contend the assault on science has been ongoing, but cite the following specific government cuts in recent months:

"It definitely seems to us these cuts are not just part of fighting the deficit, that there is a systematic attack on science and the preferential cutting of programs that may produce results not in line with the Conservative agenda," says Katie Gibbs, a PhD student at the University of Ottawa and one of the organizers of the rally.

"The Harper government is the most environmentally hostile one we have ever had in Canada. Harper pulled Canada out of the Kyoto protocol, gutted the Fisheries Act (our strongest freshwater protection law), and hollowed out our environmental assessment legislation, making it easier for extractive industries to get licences to exploit," said Maude Barlow, a former UN advisor on water and chair of the Council of Canadians. "It is heartlessly shutting down a program that costs very little to run given the incredible benefits it brings, in order to silence the voices who speak for water."

"Scientists are generally not agitators, but this continuous set of decisions has got very many scientists hot under the collar," said Findley.

The rally will begin at the Ottawa Convention Center at noon and march to Parliament Hill following.
Posted by dog gone at 8:29 AM