Plagues, the lessons lost on and by the Right 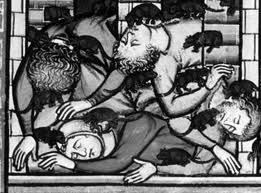 (Rats, Republicans -- how much difference is there really?)
Florida has a Tuberculosis problem, and it is getting worse, fast, as the Florida Republican legislature, signed into law by the Republican Governor, drastically curtailed their state Health Department funding, and closed the hospital that for the past 60 years had dealt with treating tuberculosis.
Those who are on the extreme right favor privatizing everything, and cutting government to nothing other than our military.
They are wrong.
One of the most clear cut examples of what is wrong with that point of view is that it assumes that our relative freedom - and I use that word deliberately here - from disease epidemics is a result of public health funding and activity by government. One of the moves of the Republicans is to reduce funding - and therefore staff and other resources - at the Center for Disease Control by 25% in the Republican budget.
Prevention is alwas cheaper than treatment or correction, whether the problems are medical, or environmental, or maintaining our infrastructure.
Cheap on the front end invariably ends up more expensive in the long run, on the bottom line. If cheap really worked, we'd have done it before now.
Here is an excellent source on the situation in Florida. Tuberculosis like other illnesses where people have begun to stop vaccinations (but shouldn't) are beginning to be a threat again because we are no longer doing what works. People take our safety, our comparative freedom from disease, too much for granted in forming their political opinion.

This outbreak of TB shoujld be the poster for what happens when you cut government, the reality versus the ideology. from newsfeedresearcher.com

The closing of A.G. Holley was a political move that put politics and profits before public safety. You will find in a very short time the sale of the hospital property will be fast tracked and that those involved will have a link to Representative Hudson and/or Governor Scott. The hospital treated the worse cases of TB, those that were extremely drug resistant and those individuals who because of non-compliance with treatment had to be court order to be an inpatient at the hospital. As usual, by the time that it is realized that the closure has created a severe public health threat, those who championed the closure will have made their profits. [19]

From Cenk Ugyer 'The Young Turks' on Current TV

The Tuberculosis outbreak that is antibiotic resistant reminds me of the classic Edgar Allen Poe story, the Mask of the Red Death, about the epidemics of Bubonic Plague in medieval Europe and elsewhere - it effectively went world wide. So here is a favorite; nothing like a little Vincent Price to round out the post.

Like the protagonist in the Mask of the Red Death, perhaps Governor Scott believes he and his rich donor friends are going to be safe somehow behind the walls of their gated communities.  They fail to understand how we are all connected; this is more of the right wing ruining our nation, playing a giant game of Jenga wth our society, our security, our safety incluing public health safety.  They are penny wise an pound foolish; they embrace a failed ideology that embraces fictonal conspiracy theory fears while ignoring any objective reality dangers they don't want to face - or pay to address.