Crossroads of the West - The Biggest Travelling Gun Show in America 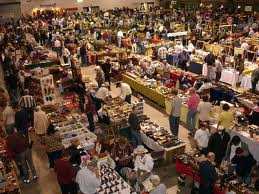 Crossroads of the West bills itself as the biggest traveling gun show in America, a bastion for constitutional rights where freedom lovers can exchange weapons, ammunition and ideas. The 35-year-old company promotes events in four states – Arizona, California, Nevada and Utah – and last year’s shows drew more than 407,000 customers at up to $16 bucks a pop. Last weekend, Crossroads occupied the Arizona State Fairgrounds in Phoenix, and although these expos swing through the area regularly, the parking lot filled up fast.

What makes gun shows such a tricky market for regulators is that often there is very little on the surface to distinguish federal licensed dealers from the private sellers who can sell weapons without a background check. This “Gun Show Loophole” has been a favorite legislative target of gun-control advocates for a decade now, and it’s one of the key provisions in the democratic platform that has so many gun rights advocates riled up.

Here at Crossroads, private sellers often have tables stocked with an equally dizzying array of firearms – many new in the box – and the only difference is that their weapons are labeled with handwritten garage sale-style price tags, and that instead of fancy canvas signs they often just post a sheet that reads: PRIVATE SELLER/NO PAPER. With enough cash and a flash of your Arizona ID, you can walk away with as many untraceable firearms as you like.

Customers who put a premium on privacy deliberately seek out these private sellers, and critics don’t like customers who put a premium on privacy, namely convicted felons, drug abusers, the mentally ill, or other “prohibited possessors.” Last year, Mayors Against Illegal Guns, an advocacy group co-chaired by New York’s Michael Bloomberg, released videos of an undercover sting at a Crossroads show here in Phoenix where investigators were able to buy on several occasions even after baiting vendors with statements like “I probably wouldn’t pass a background check.”

The self-centered nature of the gun-rights folks never ceases to amaze me. It's so obvious that some harm is being done by these private sellers, the only question is how much.  And, without interfering with the lives and rights of lawful gun owners the "private sale loophole" could be eliminated. Yet, they won't hear of it.

Why is that? Could these folks really be that self-absorbed and unconcerned about the preventable gun violence that takes place as a result of this easy access to guns?

One explanation I can come up with is that the adamant voices which rail against any and all gun control initiatives are just the fringe minority of gun owners at large.  There have been surveys that indicate that even gun owners and  NRA members agree with the background check problem.