We've often mentioned that the damage of gun violence is not only counted in deaths. But still we tend to underestimate the extent of the suffering and expense involved in serious injuries. 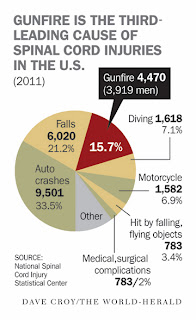 One way the gun-rights crowd attempts to side step this discussion is to say if we were really concerned about people and their suffering we'd be talking about cars or falls or swimming pools, which account for far more damage than guns.  This is an obvious attempt at obfuscation.  What we are talking about is gun violence, preventable gun violence for the most part.

Among the 100,000 people who are injured or killed by guns each year there are many thousands who suffer the kinds of injuries they never recover from.

This is the reality.  No amount of downplaying or trickery can diminish the seriousness of the toll gun violence takes on our society.