The Problem of Realistic-looking Toy Guns


In California, while "Airsoft" guns are sold with bright orange muzzle markings, full-body colored paint or clear, BB and pellet guns are exempt from special paint requirements, because, manufacturers say, they are not toys and should not be marked as such.

Three retail store owners in the greater Vallejo area contacted for this article in recent weeks said they no longer carried the realistic-looking guns. Two others declined requests to be interviewed.

In Vallejo, twice in less than four months, police have fired -- fatally -- on people allegedly carrying and/or wielding such replica guns. 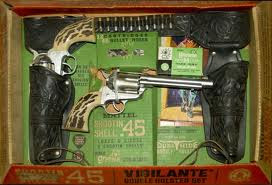 The pro-gun folks, the contentious and disagreeable ones anyway, insist that this problem does not exist. They say there's no difference between the toy guns of today and those of years ago.

Doesn't it sometimes seem that gun-rights advocates become a bit defensive whenever we suggest gun control?  What are they afraid of?  Do they really think if they give even one inch we'll take a mile?

How about if we start out with the mile.  Let's ban realistic-looking replica guns outright.

What do you think?  Please leave a comment.
Posted by Unknown at 7:28 AM