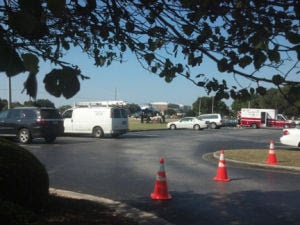 Rescue crews from Morehead City Fire and EMS Department and Vidant Medical Center helicopter crews prepare to load onto an awaiting helicopter the Morehead City Police Officer who sustained a gunshot wound during an accidental shooting in an early morning training exercise being conducted at the police department Wednesday. (Helen Outland photo)

A city police officer suffered a gunshot wound Wednesday morning during a training exercise.
The incident, which Mayor Jerry Jones called “a tragic” accident as he spoke during a news conference at the department, is under investigation by the State Bureau of Investigation. Police Chief Wrenn Johnson said that was protocol.
The mayor said the department has the city’s support and the incident was an accident.
“This is very tragic,” the mayor said. “We are very supportive of the police department. We are a big family. They (officers) train hard, but accidents can happen. We learn and improve. Both these officers are in our hearts.”


Police say the officer has a gunshot wound sustained in the accident in the rear parking lot of the police department about 8 a.m. and was transferred by helicopter from Carteret General Hospital to Vidant Medical Center in Greenville.
Now, wait a minute. Was the injury sustained during training or in the back parking lot?
One thing is clear, the mayor and the police are all one big family.  They cover up each other's negligence every chance they get.
What's your opinion?  Please leave a comment.