Blame the NRA and Its Supporters - Not Mayor De Blasio 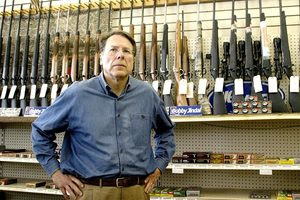 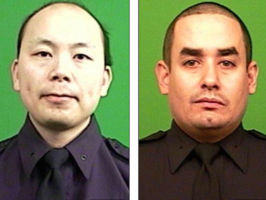 
Patrick Lynch, the president of the Patrolmen's Benevolent Association, is garnering headlines by blaming New York City Mayor Bill de Blasio for encouraging protests against police killing of black men which, he claims, has created a political atmosphere that led Brinsley to target the two police officers, gunned down while they sat in their squad car outside a Brooklyn housing project.
This is absurd. For one thing, de Blasio has been a strong defender of New York's police department, but he has also criticized police abuses and supported people's right to protest nonviolently. Equally important, Lynch must know that Brinsley was not making a political statement when he shot the two officers. Brinsley's sister told the media that her brother was "emotionally troubled" and suicidal. "He needed help," she said, "He didn't get it." He killed himself after murdering Ramos and Liu.
If Lynch wants to point the finger of blame for his colleagues' deaths, he should focus on the NRA, not de Blasio. For decades, the NRA has fought every effort to get Congress and states to adopt reasonable laws that would make it much less likely that people like Brinsley would be able to obtain a gun. The NRA even defends the right of Americans to carry concealed weapons in bars, churches, schools, universities, and elsewhere. This poses a huge threat to police and civilians alike.
Posted by Unknown at 1:34 PM