OK,I'll admit that this thought passed through my head, but I know the difference between Boko Haram and Procol Harum. 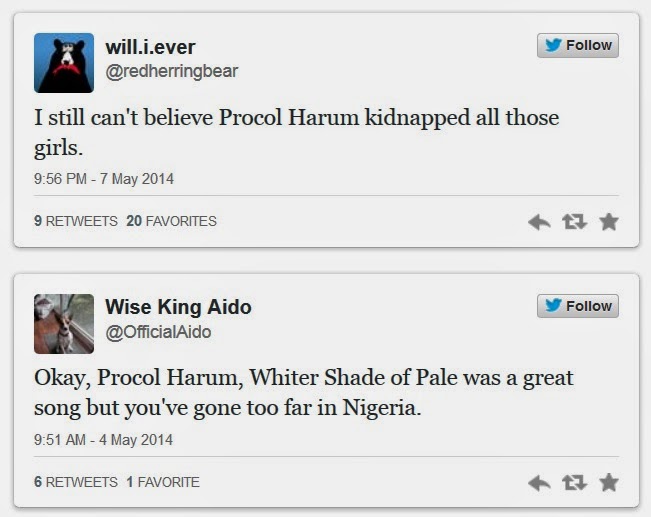 The group's official  name is "the Congregation of the People of Tradition for Proselytism and Jihad" or "The Group of the People of Sunnah for Preaching and Struggle" are translations of Arabic Jamā'at ahl as-sunnah li-d-da'wa wa-l-jihād (جماعة أهل السنة للدعوة والجهاد).

In the town of Maiduguri, where the group was formed, the residents dubbed it Boko Haram. The term "Boko Haram" comes from the Hausa word boko, originally derived from a Hausa word with meanings such as "fraud" and "inauthenticity", [a] and the Arabic word haram figuratively meaning "sin" (literally, "forbidden").  Loosely translated, the name could mean "western education is sinful", which would symbolize its strong opposition to anything Western, which it sees as corrupting Muslims. Locals who speak Hausa are unsure what it actually means.

Literally speaking, the name may be meant to convey the message that "bogus education is sinful". Dr Ahmad Murtada of the Islamic Studies Department, University of Bayero, Kano has noted in his research of the group that the name of the movement should not be understood literally from the Hausa, but rather as meaning "traversing the Western system of education is haram".

Nothing like another group of fundamentalist, anti-intellectuals.
Posted by Laci The Dog at 11:56 PM