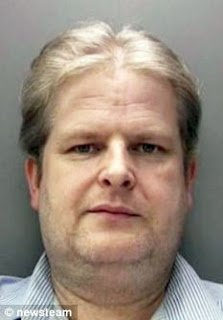 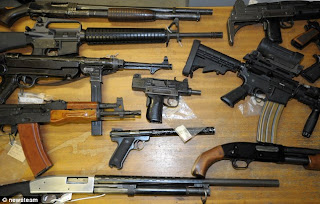 But yesterday the self-confessed gun ‘fanatic’ was starting a 16-year jail term after being convicted of a total of 29 charges of possessing and transferring the weapons to two brothers who are already behind bars.
The gun fanatic had been banned from owning guns after he was jailed for three years in 2005 for posting an illegal firearm to a legitimate dealer in Scotland.
He told officers: ‘It might sound a bit sad but in my loft I had some mannequins which I dressed as German soldiers, American soldiers – but obviously I had no guns.
Officers who seized the cache of 16 deadly guns initially feared they may have been stored on behalf of a far-Right group such as the English Defence League.
They said the guns could have caused mayhem had they fallen into the hands of terrorists or the region’s drugs gangs.

What's your opinion? Is that a too harsh sentence? He wasn't a first time offender, remember.

Please leave a comment.
Posted by Unknown at 9:50 AM