Posted one minute apart on April 7th, this: 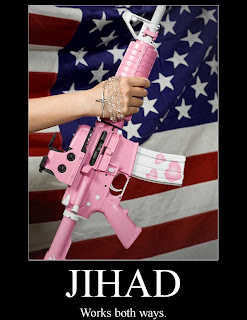 
Our Father, who art in heaven, hallowed be thy Name. Thy kingdom come. THY WILL BE DONE, on earth as it is in heaven. Give us this day our daily bread. And forgive us our trespasses, as we forgive those who trespass against us. And lead us not into temptation, but DELIVER US FROM EVIL.
For Thine is the kingdom and the power and the glory, forever and ever. Amen †

I love that little cross at the end of the prayer, and the rosary beads are a nice touch too, don't you think.

Ann posted two videos, seen here and here, which she claims have created a world-wide sensation. I wondered if she's trying to piggy-back on the fame of Pastor Terry. Although Ann's not really attractive, she does have a certain gift-o-the-gab and she does that tough-talking thing that certain types of men find appealing. Apparently she's received some death threats along with the "overwhelming" support. Here's her response.

There are a LOT of emails of concern for my safety. Yes, I knew EXACTLY what I was doing going in to this, and I am HONORED to lead you into this battle. But if you REALLY want to help me, here is what you can do. Go out, buy a koran, video yourself burning it and post that on YouTube. Do it NOW. Show the muslims how utterly futile it would be to kill me. I am delighted to lead from the front, but the only way this works is if you wonderful patriots BACK ME UP. One man storming the beach at Normandy would have been meaningless machine gun fodder. But the First Army U.S. and the Second Army U.K. storming the beach constituted a decisively victorious force. Oooh-Rah!

What's your opinion? Is she making a mistake to consider all of Islam the enemy? Her premise seems to be built on that. Does she, and the other Islam-haters, not see that there are good and bad people in every group, including the hundreds of millions of Muslims?

What about her tough talk. I think Breda and Tam could pick up a few pointers from this gal, what do you think?

Please leave a comment.
Posted by Unknown at 7:13 AM