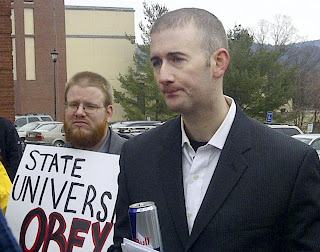 The Boston Globe reports on another pro-gun demonstration on a college campus.

Jardis and Mozingo maintain that the university system’s policy banning firearms flies in the face of state law and the state and federal constitutions. They say they look forward to returning to Grafton County Superior Court Tuesday to argue against a permanent injunction barring them from bringing weapons onto state campuses.
Jardis would not say if he was carrying a concealed firearm. Instead, he said several times, “I just want to point out that no one knows if I’m carrying a gun.’’
“Yeah, and that’s terrifying,’’ replied one female student.

Let's get one thing straight right off the bat. The really fearful ones ar those who feel they cannot leave the house without a gun. These are folks who for the most part do not enter dangerous neighborhoods, do not carry large amounts of cash, and lead perfectly normal lives. Yet, their fear of that highly unlikely attack is so great they decide a gun is the answer, in spite of evidence and commonsense to the contrary.

Now comes a female student who says she's "terrified" of guys like that. Is this worthy of being mocked? Does this indicate that she's the unreasonable one? No, of course not.

The reason pro-gun voices so readily mock people who speak up like that is because they've been practiced in turning the tables whenever possible. The are masters at accusing the others of what they themselves are guilty of. From there it just monkey-like repetition, and I would imagine the less gifted among them actually begin to believe it. They've lost touch with reality.

Look at the guy in the foreground of the picture, I think that's Bradley Jardis.  Does he have a bit of that Timothy-McVeigh intensity, or what?  And the other guy, what's he remind you of?  I realize reading facial expressions is not an exact science, but isn't that part of the situational awareness all the gun lovers keep talking about. Are they the only ones who can do it?

What's your opinion? Please leave a comment.
Posted by Unknown at 7:25 AM