Update on the Hollywood Shooting

From ABC News, Good Morning America and the AP 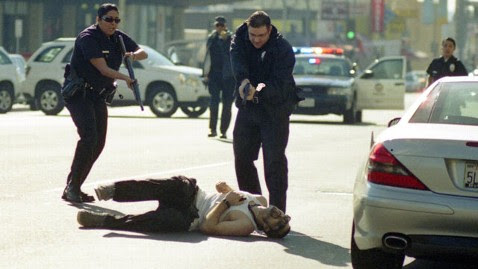 Gregory Bojorquez/AP Photo
A 40-year-old California music executive caught in the crossfire of a brazen shooting spree in Hollywood has died.
John Atterberry died shortly before 5 p.m. Monday, a spokeswoman for Cedars-Sinai Medical Center in Los Angeles confirmed.
Atterberry was shot in the face and upper body Friday as he drove his silver Mercedes-Benz through the busy Hollywood intersection of Sunset Boulevard and Vine Street.
He was the sole victim killed by Tyler Brehm, the 26-year-old gunman who went on a shooting rampage, randomly firing more than 20 shots into the street and passing cars while screaming that he wanted to die.
Amateur video taken by witnesses looking on in horror from nearby office buildings and apartments captured Brehm pacing down Sunset Boulevard in jeans and a tank top and wielding a handgun.
Christopher Johns was a witness who yelled out to Brehm from his window when the shooting began.
“I wanted to give him a clear target to distract him from what he was doing,” he said.
At one point, Brehm can be heard asking Johns for ammunition and to call an ambulance.
Moments later, Brehm was shot to death by a detective and an off-duty police officer, both of whom happened to be in the area.
Atterberry worked with rapper Snoop Dogg while he was a vice president of Death Row Records. He also collaborated with musicians including Christina Aguilera, Jessica Simpson and Michael Jackson. Atterberry spent three days in critical condition before he died.
His girlfriend, Sophia Holguin, spoke to local ABC affiliate KABC before his death.
“He is just a wonderful, wonderful individual,” she said.  “He is an awesome friend to have.  He is an awesome person to have in your life.”
Police have not released a motive for Brehm’s attack.  He had recently broken up with his girlfriend of four-and-a-half years, Alicia Alligood.
According to Alligood, Brehm sent her 14 text messages the day of the shooting, as well as a voicemail saying that he loved her.  She described Brehm as “really stressed out lately,” and said that he had just begun taking prescription drugs.
In addition to Atterberry, two people were treated at the scene for minor injuries.  One man suffered in an injury to his left thigh from a bullet that passed through his car door, while the other suffered minor cuts from broken glass.
The Associated Press contributed to this report.
Posted by dog gone at 3:25 AM