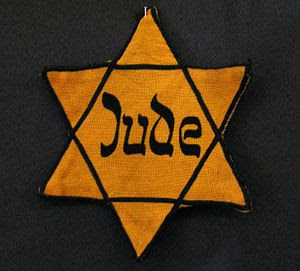 Our friend over at the 2nd Amendment, Shooting & Firearms Blog is still claiming that the Jewish disarmament of the Jews by the Nazis had something to do with their troubles.

I suggested he expand his reading a bit.

This is really sad and hard to comprehend in my mind especially after the disarmament tactics that were employed prior to the Jewish Extermination in Nazi controlled territory during WWII.

Please tell me there are some reasonable gun-rights supporters out there who do not believe this nonsense. It's really not necessary in order to resist gun registration in the US, for the obvious reason that it's ridiculous. The pro-gun person that proffers this nonsense as a reason for refusing gun registration runs the risk of sounding paranoid. It would imply registration leads to confiscation and that would be followed by what, another Holocaust, but this time of Americans, former gun owners and Conservatives?  Is that the thinking?

No, I can't believe people, seemingly intelligent people, really believe that. I suspect it's just part of their no-holds-barred arguing style. Some of them may be dumb enough to actually buy it, but most know better, but being totally bereft of a sense of fair and square debating, they keep saying it anyway.

What's your opinion?  Please leave a comment.
Posted by Unknown at 6:26 PM