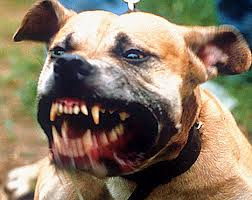 While officers spoke to Oliver, Lesner said he heard a dog at the side garage door “barking, growling and smashing in to it.” The door burst open and a white 100 pound pitbull came running out at full speed. Lesner wrote that the dog appeared “extremely aggressive, agitated and wanting to do harm to the officers.” As the dog ran past Lesner — focused on the officers nearest to Oliver — Lesner shot it three times in the back and lower back area with an M4 rifle. When the dog attempted to get back to its feet, “snarling and attempting to bite,” Lesner wrote that he fired four more rounds in to the animal. The report doesn’t say if the dog was killed.

At first I thought I'd have another story about overly trigger-happy cops doing their thing, but after reading the description of that scene, I'm with them 100%.

What do you think?
Posted by Unknown at 5:18 PM