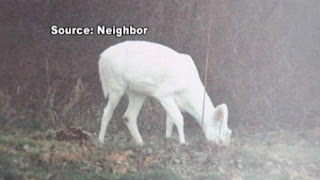 
Officials say on the first day of hunting season, someone drove down Elbe Road in Warrick County near Evansville and shot a white deer between houses after dark.

Neighbors tracked the poacher down and held him until officials arrived.

Wildlife officers say killing a white deer is legal in Indiana, but it's illegal to shoot the deer from a public roadway.

“We have elementary children that live in the neighborhood, the main concern that someone just pulls on the road and starts shooting between houses,” said neighbor Ginger Wilcox.


Officials say the suspect could face six charges, including charges for shooting after hours and shooting from a roadway.

Six charges, I wonder if that includes "felon in possession of a firearm?"

Gun availability needs to be severely restricted to the irresponsible ones, regardless of their past.

What's your opinion?  Please leave a comment.
Posted by Unknown at 7:17 AM