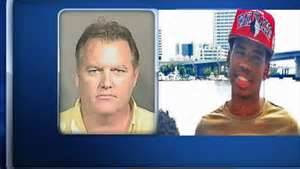 Local news reports - our post at the time of the incident.

A Florida grand jury has indicted a man on a first-degree murder charge in the death of a teenager following an argument over loud music coming from the teen's car.

The Florida Times-Union reports officials in the state attorney's office said Thursday they won't be seeking the death penalty against 46-year-old Michael David Dunn. He was initially charged with second-degree murder.

Dunn is accused of the Nov. 23 shooting death of 17-year-old Jordan Davis.

I'm glad to hear they won't seek the death penalty. For me it's enough that there's one less dangerous gun owner out there. It's pretty sure Mr. Dunn won't be shooting anybody else for a good long while.

What's your opinion?  Please leave a comment.
Posted by Unknown at 9:04 AM