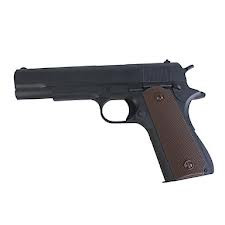 Derbyshire Police and Crime Commissioner Alan Charles is asking families and charities not to give youngsters realistic-looking toy guns this Christmas.

His call comes in support of an appeal by the Gun Control Network amid concerns that many children have already received toy and BB guns – which fire small plastic or aluminium balls – as gifts from Santa.

Mr Charles said: “While most toy guns are harmless, BB guns can cause considerable damage if fired irresponsibly. There’s also a strong argument that giving toy and BB guns to youngsters can lead to future gun crime and antisocial behaviour.”

He's in England, what does he know?

What's your opinion?  Please leave a comment.
Posted by Unknown at 7:30 AM