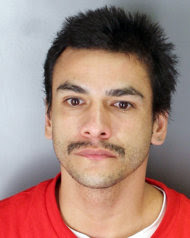 Authorities cornered Hector Celaya, 31, on a country road in the middle of citrus orchards 30 miles away from the reservation and about six hours after the shootings Saturday night. In the car with him were two daughters, 8-year-old Alyssa and 5-year-old Linea. One had life-threatening injuries; the other did not. Police did not say which.

Authorities have not disclosed what motivated Celaya to kill his relatives, who lived in a travel trailer on a family compound on the reservation of about 800 people. But tribal members said the former custodian at the reservation's casino had a troubled past.

He eventually pulled over in a rural area deep in the heart of citrus country outside the tiny community of Lindsay, about 30 miles from the reservation. Celaya opened fire, prompting deputies to return fire, sheriff's spokeswoman Chris Douglass said.

She did not say how many shots were fired, but said Celaya fired his gun "multiple times." Celaya was shot during the exchange of gunfire, Douglass said. He died hours later at a hospital. It was unclear when Celaya shot his daughters, Douglass said. Police said he had a tattoo of his daughter Alyssa on his right leg.

Police said Celaya was "known to law enforcement" and "known to use drugs," though Douglass could not provide details.

This is the gun culture that Whitlock and Costas were talking about.

What's your opinion?  Please leave a comment.
Posted by Unknown at 6:31 AM