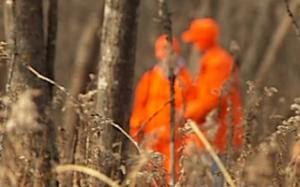 The state Department of Natural Resources says 48-year-old Clint Morgan of Saucier, Mississippi was wounded around noon Sunday. Saucier was struck in the elbow by a slug fired by another member of his seven-person party in Monroe County, southwest of Blakesburg. Saucier was taken to a Des Moines hospital for treatment.

Officials say fog was not a factor in this case, but it was a factor in another accidental shooting west of Indianola where 58-year-old Miles Sagen was wounded around 8:30 a.m. by another member of his nine-person party. Sagen was taken to a hospital in Des Moines for treatment.

Iowa DNR recreational safety officer Allen Crouse said Sagen was hit by a slug fired from 144 yards away. At the time, Crouse says it was impossible to see more than 100 yards because of fog. He urges people not to hunt in dense fog because it's not safe.

One of the problems is that irresponsible hunters are not held accountable for their actions.

What's your opinion?  Please leave a comment.
Posted by Unknown at 6:41 AM