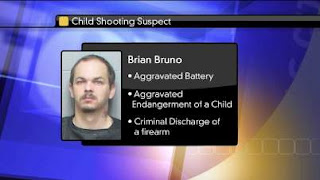 A spokesman for the Ottawa Police Department tells FOX 4 on Friday afternoon officers went to the house and discovered a 4-year-old boy had been accidentally shot in his upper left leg.

Prosecutors have charged 39-year-old Brian Bruno, the boyfriend of the child’s mother, with aggravated battery, aggravated endangerment of a child and criminal discharge of a firearm.

Investigators say Bruno was showing the handgun to a friend in the family’s living room when the gun fired once.

I guess he was another lawful gun owner right up until the moment he shot a kid. But, it was only an accident.  Why all the fuss?