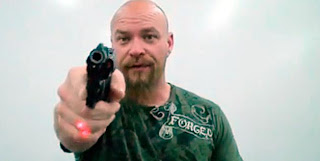 
Tennessee Department of Safety and Homeland Security has suspended the handgun carry permit of a local man who threatened to "start killing people" to protect his Second Amendment right.

In a statement released Friday officials said they had suspended the handgun carry permit of James Yeager, CEO of Tactical Response based on "material likelihood of risk of harm to the public".

On Thursday, a video of Yeager angrily claiming he would "start killing people" if President Barack Obama moved forward with gun control measures began to go viral on the internet.

"The number one priority for our department is to ensure the public's safety. Mr. Yeager's comments were irresponsible, dangerous, and deserved our immediate attention. Due to our concern, as well as that of law enforcement, his handgun permit was suspended immediately. We have notified Mr. Yeager about the suspension today via e-mail. He will receive an official notification of his suspension through the mail," Commissioner Bill Gibbons said.

Maybe I'm gonna just have to rethink my less than positive opinion of the Great State of Tennessee.

What do you think?  Please leave a comment.
Posted by Unknown at 12:59 PM