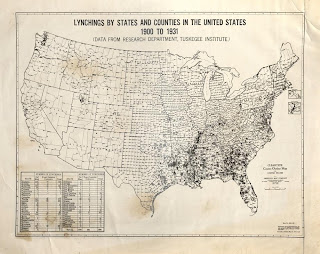 (click to enlarge)
This map, compiled using data gathered by the Tuskegee Institute, represents the geographic distribution of lynchings during some of the years when the crime was most widespread in the United States. Tuskegee began keeping lynching records under the direction of Booker T. Washington, who was the institute's founding leader. In 1959, Tuskegee defined its parameters for pronouncing a murder a “lynching”: “There must be legal evidence that a person was killed. That person must have met death illegally. A group of three or more persons must have participated in the killing. The group must have acted under the pretext of service to justice, race or tradition.” In 1900-1931, Georgia led the lynching tally, with Mississippi, Texas, Louisiana, Florida, Alabama, and Arkansas rounding out the top seven worst offenders.

Although I'm feeling a bit better about Tennessee since they revoked James Yeager's carry permit, I hold onto my natural prejudice against some of the other Southern havens of enlightenment.

What's your opinion?  Please leave a comment.
Posted by Unknown at 4:03 PM