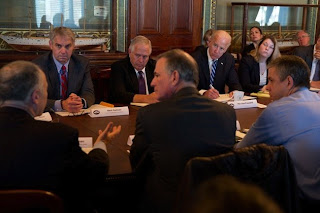 Not that there was ever much doubt, but the National Rifle Association bluntly declared on Thursday that it would not cooperate with any White House drive for gun control in the aftermath of the elementary school slaughter in Newtown, Conn.

“We were disappointed with how little this meeting had to do with keeping our children safe and how much it had to do with an agenda to attack the Second Amendment,” the powerful lobbying group said in a statement after talks with Vice President Joe Biden.

"While claiming that no policy proposals would be 'prejudged,' this task force spent most of its time on proposed restrictions on lawful firearms owners—honest, taxpaying, hardworking Americans," the NRA said.

"We will not allow law-abiding gun owners to be blamed for the acts of criminals and madmen," the organization said.

There's a built-in lie in the NRA position. They refuse to acknowledge that those "lawful firearms owners - honest, taxpaying, hardworking Americans" are the source of nearly all the guns used in crime.

There are four major ways in which guns are diverted into the criminal world.  The recent Newtown CT incident is an example of theft. It makes perfect sense that gun restrictions must be aimed at the folks who own guns legally.

What's your opinion?  Please leave a comment.
Posted by Unknown at 8:35 AM