Should students carry guns on campus? 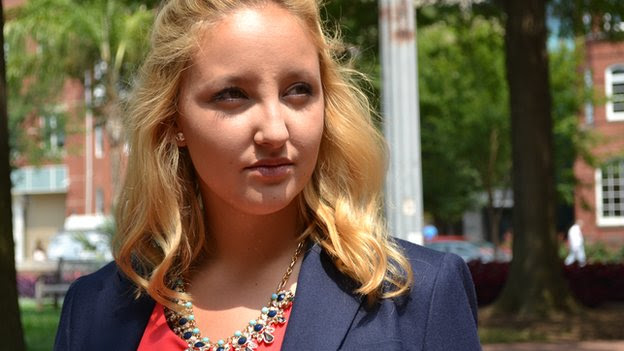 A former beauty pageant contestant from California, 20-year-old Taylor Woolrich is the first to admit she's not your usual guns rights campaigner.

She's fighting for the right to carry a weapon on campus, for a very personal reason. For years she's been stalked by a man she first came into contact with while waitressing at a cafe.

He would turn up to see her every day and began to track her down outside work. An emergency restraining order failed to deter him. Things became even more terrifying when she moved across the country to study at Dartmouth college in New Hampshire.

"It wasn't even on my mind, and then he contacted me via LinkedIn and used social media to continue to contact me - sent me various very frightening messages, making it very specific he knew where I was," she says.

One summer, when she went home to California, he turned up at her parents' doorstep. She says police found what they call a "rape kit" - rope tied as a slip-noose, gloves, duct-tape, flash light, and a sweatshirt - inside his car.

Taylor's stalker is currently in jail. His sentence will soon be up.

He's due to face trial soon on further charges relating to her case. Still, Taylor is desperately frightened that he could be released, or allowed out on bail. She's certain that if that happened, he would be able to find her.
For that reason, she wants the right to carry a gun on her university premises, arguing it's the only way she could overpower him if the pair came face to face.

Dartmouth College has refused to comment on this specific case due to privacy laws, but says the safety and security of all students is a top priority for them. Any student who reports being stalked is given personalised and heightened protection. On top of this, safety improvements are made, as and when they are needed, says a spokesman.

Your rights shouldn't change once you step inside the campus.”

Crayle VanestStudents For Concealed Carry
Like the vast number of colleges and universities across the country, Dartmouth has a policy which prohibits handguns on campus.

The laws on guns on campuses vary from state to state. In more than half of the country, it's up to the universities themselves to decide weapons policy. In New Hampshire, where Dartmouth is located, the decision is left to the college, which chose to keep its campus gun free.

Many institutions believe that allowing weapons on campus has the potential to inflame tense situations, rather than diffuse them.
Posted by Unknown at 11:43 AM