A Fool and his Money are.. 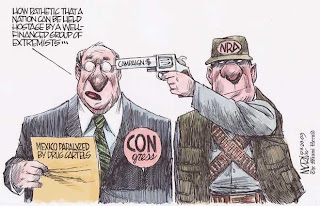 ...well, you know the rest.
The NRA is fond about boasting how much clout they have in Congress. In reality, though, not so much:

Of the 49 Democratic incumbents who lost, 29 (59 percent) had an A rating from the NRA, says the Brady Campaign. and 25 (51 percent) received financial support from the NRA. The gun-control group said that two of the 101 Democratic House incumbents who co-sponsored legislation to close the gun show loophole lost. Brady president Paul Helmke argued that “appeasing the gun lobby had little political benefit.”