Portland on the Cutting Edge of Gun Control 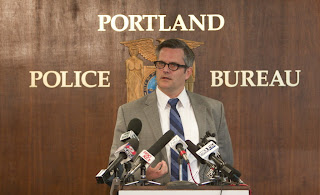 Mayor Sam Adams of Portland Oregon who also wears the hat of Police Commissioner, has some interesting gun control proposals.

The three new laws that he's proposing: A child safety law that would hold adults responsible if their gun gets into a child's hands, a theft reporting law that would penalize gun owners who don't report the theft or loss of a firearm; and an exclusion zone measure that would designate shooting hot spots in the city, and allow the city to exclude gun offenders who are on probation or under juvenile authority from entering a public area or park within the hot spot locations, unless they live in the area, go to school, obtain social services or travel through it.

The two other measures would amend city code: a special 7 p.m. curfew for juveniles who have been convicted of a gun offense, found to have possessed, purchased, used, transferred or transported a firearm unlawfully; and placing a mandatory minimum sentence of 30 days in jail for previous gun offenders found carrying a loaded gun in a public place, which includes a vehicle or on transit. This would not affect concealed-handgun license holders. Right now, the court has discretion to sentence a violator for up to six months in prison, and a fine up to $500, but it's rarely done.

Some of this is apparently cutting edge stuff.

David Kennedy, director of the Center for Crime Prevention and Control at the John Jay College of Criminal Justice, said the exclusion zones for gun violence is unique. "There's lots of research and common sense that would say that would be worth trying," Kennedy said. "Ordinary folks do not shoot people with guns. Those who do, usually have prior convictions. So it's a very intriguing idea."

What's your opinion? Please leave a comment.
Posted by Unknown at 11:08 AM