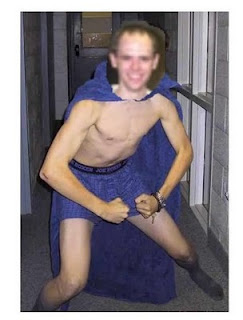 Our friend Linoge 'splains why he needs a gun:


At 165-170 pounds at 6’2?, I am a relatively skinny individual who could manage to bench press a bit more than my own weight when I was in perfect shape (or, at least, as perfect shape as I have ever been). However, when I was in that peak condition, I was spending upwards of an hour a day in a gym with men sometimes twice my mass, who were moving weights upwards of three to four times greater than I could even attempt – sure, these guys were Marines, but in this day of MMA, protein shakes, and whatever-the-hell else out there, muscle-bound monsters who can bench-press entire garages are no longer the circus side-show act they once were.

I must stifle a chuckle here. 330 pound Marines benching between 500-700 pounds? I think Linoge has been spending a bit too much time with the Xbox. There's more:


And do you really think someone like me is going to be able to put up much of a fight against someone like them in an unarmed confrontation? Sure, I know a little (tremendously rusty) karate, but unless you are Bruce Lee, going fisticuffs with a man twice your mass, and all of it muscle, is a recipe for a world of hurt. Sure, I might be able to run away – might – but what if he has friends, or I am in an unfamiliar area, or there is nowhere to run to?


And so I procure and utilize equipment that should, when employed properly and with the appropriate training, aid me in successfully resolving a situation I hope never to encounter… just like I keep fire extinguishers everywhere in the house there is open flame or fuels; just like I wear a seatbelt every time I am in any vehicle, even those with airbags; just like I keep stores of dried and canned foods in the basement (which, given the average Tennesseean’s response to snow, may actually be used this year); just like I am CPR-qualified and keep first-aid kits scattered around the house; just like I keep backups and copies of all essential documents and data; just like I have health insurance, and life insurance, and car insurance, and homeowner’s insurance… I sincerely hope I am able to make it through life without ever having to use or rely on any of those tools, or the countless other preventative ones I have (well, aside from life insurance – that one is kind of hard to avoid), but each and every one of them was secured and is maintained with the knowledge that shit happens, at extraordinarily bad times, and if you do not already have those tools available to you, by the time you need them it is already far too late.

Linoge engages in some sloppy sleight-of-hand here.  Note that he attempts to pretend that a firearm can never be used offensively when, in fact, guns are solely offensive weapons.  Second, Linoge demands we believe the introduction of a gun will always resolve a dicey situation; never does he admit a gun can often escalate what may be an innocuous encounter into something more dangerous and deadly.  He goes to mae specious claims about being trained but, in fact, he isn't.  Nor is a gun anything like health insurance or smoke alarms--misuse of either isn't going to result in someone else's death.

In reality, the reason Jonny carries is because he believes a gun buys him respect.  It has nothing to do with self-defense.
Posted by Jadegold at 2:58 AM