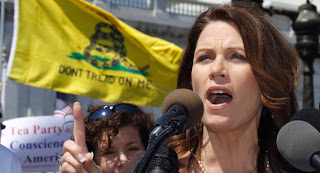 Could this be any more foolish? Not only has Obama proven to NOT be a threat to gun rights, this strategy failed miserably in 2008.


In a well-received video greeting, Rep. Michele Bachmann urged gun owners Friday to be as engaged in 2012 as they were during the midterm elections that gave Republicans control of the House.


“The right to keep and bear arms has to be protected because the Second Amendment is the final guarantor of all our constitutional rights,” the Minnesota Republican said in a pre-record message for thousands of activists at the National Rifle Association’s annual meeting. “In 18 months, we’ll face one of the most important elections of our time. In 2012, we have the opportunity to repeal the current president and elect a Constitutional conservative who will protect our Second Amendment rights.”

What's your opinion? Please leave a comment.
Posted by Unknown at 8:38 AM