How are those Gun Laws working, Florida? 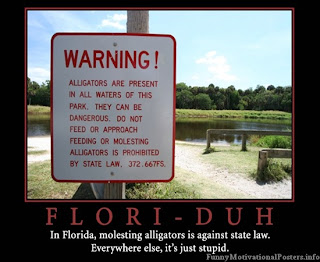 Gunloons often cite Florida as a place were lax gun laws have led to a safe, crime-free utopia.

But, as always, gunloons have their facts wrong.

When Florida lawmakers in 2005 made their state one of the first to significantly expand its citizens' self-defense rights, they hoped doing so would deter criminals and ultimately reduce violent crime.

What they got instead was two years worth of increasing gun violence. By mid-2007, the incidence of murders, armed robberies and assaults had increased statewide by 42 percent, according to the Florida Department of Law Enforcement website.
Posted by Jadegold at 10:06 PM