The Mystery of Hitler's Gun 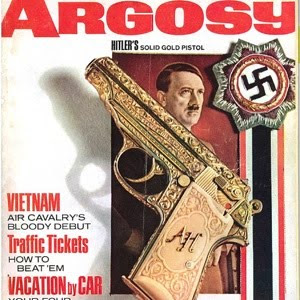 Among these many treasures was a case containing a gold-plated semiautomatic pistol. Hitler’s initials were inlaid with gold on the ivory grips. This was the gift of Carl Walther, whose family made hundreds of thousands of weapons sold worldwide. Of all his gifts, Hitler, who had a fondness for firearms, particularly prized the pistol and, after the day’s festivities, had the pistol shipped to Munich, where he kept it in a desk drawer in his apartment.

Sounds like some of the guys I know, "prized pistol," and "fondness for firearms."

What do you think? Please leave a comment.
Posted by Unknown at 7:38 AM