Just One Vote Can Make All the Difference

The Daily Caller reports on what I've been saying all along.

When Americans flock to the polls in 13 months, we will not simply decide which direction our country should take over the next four years. Rather, we will decide whether or not our fundamental, individual right to keep and bear arms will survive over the next several decades.
Currently, the Second Amendment clings to a 5-4 pro-freedom majority on the Supreme Court. Just one vote is all that stands between the America our Founding Fathers established and a radically different America that Barack Obama and his supporters envision. 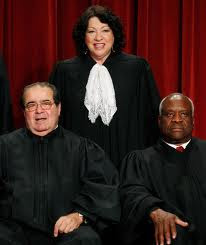 "Just one vote," did you get that? That's all that stands in the way of god-given and basic human and inalienable.

Of course, the true gun-rights believer has already decided it doesn't matter what the Supreme Court says, unless it agrees with him. But the difference will be great. In spite of the opposition of many gun owners, if and when the Supreme Court can be changed by that one vote, common sense legislation may be possible which hitherto has not. This may in turn lead to the kind of improvement which will convince many middle-of-the-road folks. A Golden Age of Gun Control awaits.

Not very, and I believe like Instapundit, it's coming next term.

What's your opinion? Please leave a comment.
Posted by Unknown at 7:32 AM