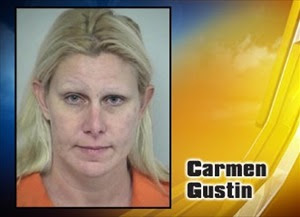 North Las Vegas Detectives arrested Carmen Gustin of North Las Vegas on charges stemming from a shooting that occurred in her home on Aug. 9 that left her 10-year-old sun in critical condition with an allegedly self-inflicted gunshot wound to the head

Gustin, 38, was booked into the Clark County Detention Center on charges of child abuse with substantial bodily harm, two counts of child neglect, and one count of destroying evidence.

Authorities say the boy appears to have found a handgun in the house and shot himself Aug. 9 while he was home alone with a 3-year-old brother.

Charging documents accuse 38-year-old Gustin of initially telling police her son's head injury came from a fall. They say she also took the gun her son had used and hid it in a dresser drawer.

It's not the amazing negligence of leaving a gun around kids that gets people locked up. It's lying to the police about it. That really pisses them off.

What's your opinion?  Please leave a comment.
Posted by Unknown at 7:21 AM