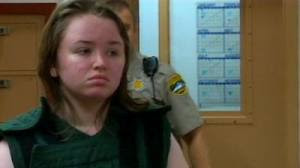 The Seattle Times reports on the latest random mass shooting.  They're coming so fast now we can hardly keep track of them.


A 20-year-old woman who allegedly opened fire in a grocery store on the Key Peninsula on Saturday afternoon, wounding three strangers, was charged today with two counts of first-degree attempted murder and one count of first-degree assault.

Laura Sorenson pleaded not guilty to the charges during her arraignment today in Pierce County Superior Court. She is being held in the Pierce County Jail in lieu of $1.5 million bail.

“There does not appear to be any understandable motive for this shooting,” Pierce County Prosecutor Mark Lindquist said in a news release. “The defendant said she didn’t even know the men she shot.”

According to Lindquist, Sorenson walked into the Peninsula Market on Saturday afternoon, pulled a revolver out of her purse and made a comment about killing people. She fired until she was out of bullets, hitting three men, he said.

The victims were a clerk, a developmentally disabled man, and a 78-year-old man who was crouched down and hiding. Two of the victims were hospitalized. One victim is in critical but stable condition, Lindquist said.