What the Gun Control Movement Can Learn from Gay Rights 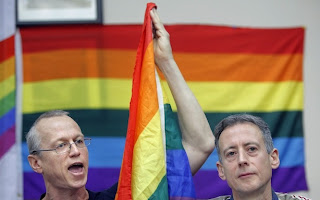 The Atlantic Wire published a fascinating article about how the gun-control movement might improve its approach.  Basically, taking a cue from the marriage-equality movement, gun control folks need to mobilize some wealthy backers.

Which gets at what may be the most important difference between the push for gay marriage and the push for more effective regulation of guns: When gay-rights advocates achieved their marriage victory in New York, they benefited from a relatively weak and poorly organized opposition movement. That's a luxury that gun control advocates will never have.

But if Bloomberg and other wealthy supporters of gun control were to create a single-issue Super-PAC, seed it with $200 million, hire experienced operatives to scare on-the-fence legislators and protect rebels, the political fight with the N.R.A. would start looking a lot fairer, fast.

Why do you think the gun-control folks haven't already done this? Wouldn't it be fairly easy to find a handful of super-rich supporters who could come up with a couple hundred million? I would imagine some of them would contribute big just to thwart the NRA.

What's your opinion?  Please leave a comment.
Posted by Unknown at 10:08 AM