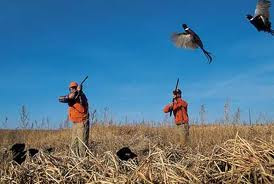 A Nebraska man was accidently shot by someone in his hunting party Sunday in the Selby area, said Walworth County Chief Deputy Sheriff Josh Boll.

The 70-year-old man was taken by ambulance to Mobridge Regional Hospital and later to St. Alexius Medical Center in Bismarck, N.D., where he is in stable condition. The man had serious, but non-life-threatening, injuries, Boll was told.

The man, whose name is not yet being released, was part of a four-person group hunting pheasants southeast of Selby near 136th Street and 310th Avenue, Boll said.

A member of the man's party was shooting at a pheasant when the man was accidently shot with a 12-gauge shotgun, Boll said.

We just posted something about the disparity between the news we read of gun accidents and the supposed low numbers of them provided by so-called official sources.

What do you think?  Is it possible that some gun accidents are not getting into the official data base?  What about the other reporting the pro-gun side relies so heavily on?  In North Dakota they have exceedingly low numbers of everything to do with the misuse of guns.  Or do they?

Please leave a comment.
Posted by Unknown at 10:46 AM