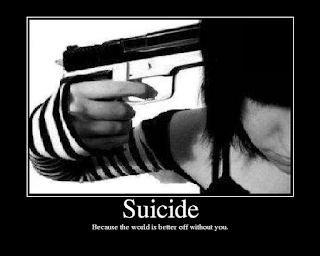 Without fail, gunloons will address any question of gun suicide with facile comments such as ...

"What?  Don't you  support the right for someone to take their own life?"

But suicide is a person's right.

In addition, some people prefer to do things for themselves.


Of course, such arguments are ridiculous.  They are the equivalent of claiming that gun violence can never occur in states where there exists minimum gun control laws.

Such arguments are a smokescreen.  The hope of the gunloon is to deflect attention away from the easy access to guns.

Suicide isn't a one-size-fits-all proposition.  As we all know, many gun suicides occur after someone has killed another and doesn't want to address the aftermath: prison, embarrassment, notoriety, etc.  Most gun suicides involve fleeting moments of despair--the loss of a girlfriend, job loss, embarrassment, social humiliation, etc.

The WaPo has an excellent account of euthanasia in the Netherlands.  In the story, the author recounts his wife's own informed case of suicide.

The key word is "informed."

Most gun suicides are anything but "informed."
Posted by Jadegold at 2:41 AM