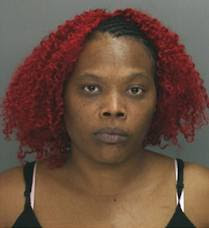 A regional Gun Violence Task Force last week arrested a woman with a clean criminal record accused of illegally purchasing six guns for a convicted felon who would have been barred from buying and owning firearms.

Agents from the task force also arrested the felon, Michael Gardiner, 31, at his home in the 7000 block of Yocum Street in Philadelphia. He had two of the illegally purchased guns when arrested, according to the Philadelphia District Attorney's Office.

Gardiner has been convicted of several crimes since 2002, authorities said, including robbery and theft.

His accused accomplice, Lakeisha Taylor, 41, admitted to agents that she had bought Gardiner six guns since December 2011, authorities said. A suspicious salesman tipped off the task force Oct. 11 when Taylor bought two .40-caliber handguns at a local store.

She was arrested Wednesday and Gardiner on Thursday. They were charged with gun trafficking.

Because of the lack of proper gun control laws, it's very difficult to identify straw purchasers. I wonder what it was in this case that tipped off the salesperson?

What do you think?  Please leave a comment.
Posted by Unknown at 11:41 AM