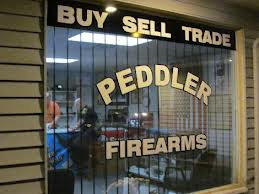 Several rifles were stolen from a Columbus business.

Police officials told the newspaper a passerby noticed around 6:30 a.m. that glass was broken at Peddler Firearms, 1630 Home Ave.

The business owner said long guns were taken after the thieves cut locks securing the weapons.

Columbus police officials told the newspaper they’re eager to get the weapons off the streets because they are “extremely dangerous in the wrong hands.”

The missing weapons include:
Anyone with information is asked to call police.

Gun shops, like individual gun owners, need to be more responsible for the security of their guns. Failure to do this should be a crime.

What's your opinion?  Please leave a comment.
Posted by Unknown at 7:44 AM