Madonna is Getting Desperate to Shock her Fans 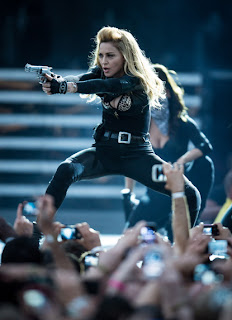 Madonna loves to shock but her concert in Denver Thursday night took that to a whole new level. Using a fake gun to shoot a masked gunman and climbing up a wall splattered with blood, Madonna's Gang Bang, which includes the lyrics "shot my lover in the head."

The scene was far too familiar to what happened in a theater in nearby Aurora July 20 during a midnight premiere showing of The Dark Knight. A masked gunman opened fire, killing 12 and injuring another 58.  James Holmes has been charged in the horrendous crime.

“We’re dancing and all of a sudden people started realizing what the song was,” concert-goer Aaron Fransua, 25, told AP “We all just stood there. Everybody who was around me all had shock on their face. I heard a lot of ‘wows,’” Fransua said.

I think Madonna is the greatest, but it might be time to retire.  Her twenty-something competitors are too hot and too brazen for her to keep up with.  No one of them will ever come close to touching her and her career, so there's no need for desperate theatrics in order to compete.

What's your opinion^  Please leave a comment.
Posted by Unknown at 11:55 AM