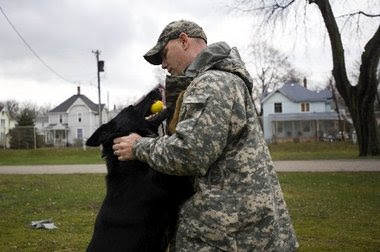 In this 2012 file photo, Jackson County Sheriff's Deputy Mark Easter rewards his police dog, Brix, after a practice narcotics search. Easter's 3-year-old son, Michael, on March 2 accidentally shot himself with a handgun registered to his father. Easter and his wife, Melissa, are "devastated" by the tragedy, the couple's lawyer, Eric White, said.

Michigan Live reports further to our post at the time of the incident.

“It is just a horrible set of circumstances,” White said.

Most see it as a terrible tragedy, he said. “It is easy to say that something like this can be prevented, but people are human.”

Hindsight provides the clearest vision, he said. “You can say the same thing about so many tragedies…”

Further, state police have forwarded their reports to the county prosecutor’s office and Prosecutor Jerry Jarzynka has asked the state attorney general to assign a special, outside prosecutor to review the case and decide whether it warrants any criminal prosecution.

“I don’t know what that would be,” White said when asked about any potential charges.
Not all negligence is criminal, he said.

“This is indeed an isolated tragedy that will affect this family forever,” he said.
The odds of such an accident occurring again have to be “immeasurable,” he said.


I definitely don't think the other kid should be taken away from them unless there are extenuating circumstances. I don't necessarily think Deputy Easter should go to jail. But, I cannot imagine how anyone could consider him responsible enough to own and use firearms. He has proven otherwise.

One strike you're out means people hare held accountable for their actions.

What's your opinion?  Please leave a comment.
Posted by Unknown at 6:28 AM

Labels: michigan, one strike you're out