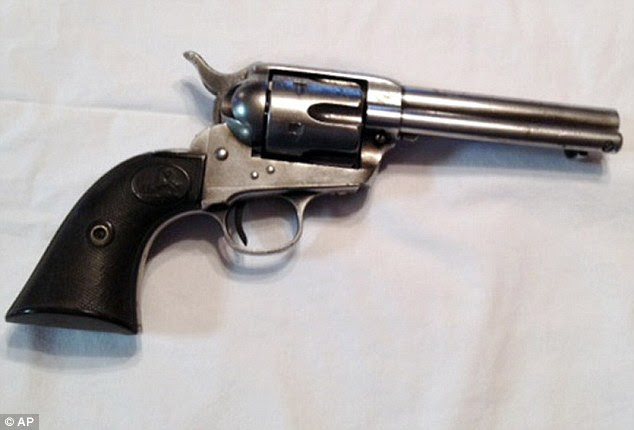 A  pistol and other possessions belonging to a one-time Old West outlaw who later ran for governor of Oklahoma and became an actor are going up for auction next month.


The .45 Colt revolver owned by infamous outlaw Alphonzo "Al" J. Jennings could go for as much as $30,000 during an auction June 5 in Woodward, said Ira Smith, auctioneer with Smith & Co. Auction and Reality Inc.
Jennings was born in Virginia in 1863 and moved to El Reno, Oklahoma, where he became the prosecuting attorney

for Canadian County, according to the Oklahoma Historical Society.

Trova Info su Attorney
Trova informazioni, notizie e altro ancora su Attorney
SmartShopping.com/Attorney
?X
In 1895, he joined his two brothers in a law practice in Woodward. Later that year, one brother was killed and another wounded in a shootout with a rival attorney. Jennings later formed an outlaw band that attempted to rob trains and general stores before he was captured and sentenced to life in prison.
One of his brothers got his sentence reduced, and Jennings was released just a few years later. He ran unsuccessfully for Oklahoma governor in 1914 and then moved to California, where he appeared in at least two westerns before dying in 1961.
"Al Jennings is probably one of the most enigmatic characters in Oklahoma history," Oklahoma Historical Society executive director Bob Blackburn said. "He was a potential candidate for governor, so he had a professional side to him — an ambition to be accepted by the community — and at the same time, he had this urge to get rich quick. He was not successful at either one."
Posted by Unknown at 4:16 PM