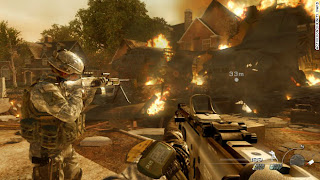 
Norway's alleged mass killer testified on Thursday that he played video games as a way to train for a shooting spree that killed 77 people last summer. In particular, Anders Behring Breivik said at his trial that he played "Call of Duty: Modern Warfare 2" as a means of shooting practice, according to CNN's report.

The confessed shooter also said he once played the online game "World of Warcraft," a role-playing adventure with multiple players from around the world, for as many as 16 hours a day.

For people who have long suspected that there is some link between violent video games and real-world violence, the statement offered frightening new evidence for why the video-game industry should be more strictly regulated.

What's your opinion? Is it possible that those extremely violent games add the the problem?

In Breivik's case though, do you think there's a pattern developing?  First he said his acts were self-defense because of the Islamic infiltration of Scandinavia and the leftist governments failure to stop it. That's like blaming it on something, isn't it?  Now it's the fault of the video games.

What do you think?  Please leave a comment.
Posted by Unknown at 5:54 AM