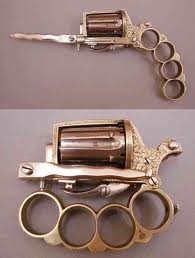 Remember this?
Ask any ER doc, he or she will tell you the truth, knivfe [sic] attacks are more lethal than gun attacks. Harder to fix too.

Lots of gunloons like to make up stuff like this because they can then pretend firearms aren't really all that deadly or dangerous.

Now, I could debunk this a number of ways. The first way is pretty obvious; it's much more difficult to make a lethal knife attack than a lethal gun attack.  If an assailant uses a knife, he has to be able to get within an arm's length of his intended victim.  And that victim could flee, fight back, use arms and legs to ward off the attack, etc.  All of which make a lethal knife wounding much less likely.  Once more, there's a very good reason why we send troops into combat with firearms and not knives.

Commenter P tells us "any ER doc" will tell you knife attacks are more lethal than gun attacks.  Really?  Care to name one?    Of course, one can plug the term "gun shot and stab wound mortality" into Google and obtain a fairly large number of studies from the US, Australia, Finland, Switzerland, Canada and other countries that show not only is gun wound lethality is higher than stab wounds--but it is many times higher.  From Tim Lambert:
For example a study in The Journal of Trauma (36:4 pp516-524) looked at all injury admissions to a Seattle hospital over a six year period. The mortality rate for gunshot wounds was 22% while that for stab wounds was 4%. Even among patients that survived, gunshot wounds were more serious --- the mean cost of treatment for these patients was more than twice that for stab wounds.
Posted by Jadegold at 11:41 PM